Guide to Investing in Gold and Silver by Mike Maloney! 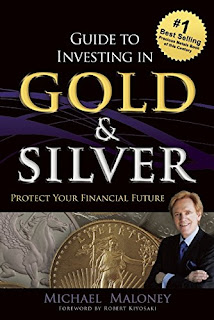 You can download the book for free using the below link  https://static.goldsilver.com/pdfs/GTIIGS_MikeMaloney.pdf


Author:
Michael Maloney is host of The smash-hit video series Hidden Secrets of Money, author of the bestselling Precious metal book Guide to Investing in Gold and Silver, and founder of GoldSilver.com, one of the world's most highly regarded investment education companies and a global leader in gold and silver sales.

Mike discovered a passion for monetary history, devouring dozens of books and countless web pages. He discovered that the same economic patterns, or cycles, kept repeating over and over throughout history, from ancient times to modern day.

In 2002 to Mike discovered that gold and silver were incredibly undervalued and started buying.

With that newfound understanding, Mike invested his family's wealth 100% in gold and silver, and remains 100% invested in them today.

In 2004, Mike met famed author and financial educator Robert Kiyosaki, of Rich Dad, Poor Dad fame. Robert encouraged Mike to share his understanding of monetary history, economics, and recurring financial cycles with others, so that they, too, would have the ability to secure their wealth and their families' futures against the increasingly unstable stock markets and financial system.

In 2005 Mike founded GoldSilver.com, began writing his book, and started speaking at investment seminars all over the world to audiences as large as 30,000 people.

"For 2,400 years, as people have lost faith in fiat currencies; they have turned to real money in the form of gold and silver," Mike says. "Today, with global debt spiralling and governments increasingly manipulating currencies and taxing savers, the stage is set for a modern 'gold rush' to the safe haven of precious metals just when supplies of those metals are precariously low. The opportunity for those who position themselves in precious metals ahead of the crowd is like none we will see again in our lifetimes.


The Guide to Investing in Gold and Silver is a virtual gold mine of information about Precious metals investing. In the book, Maloney details the history of economics Cycles, flat currency and the short-sighted decisions governments make that cause flat currencies to lose value over time.


Before Understanding the Guide to Investing in Gold and Silver, Let’s understand what Gold is and why it is so valuable.

Scientists believe all the gold on Earth formed in supernovae and neutron star collisions that occurred before the solar system formed. In these events, gold formed during the r-process. Gold sank to the Earth's core during the planet's formation. It's only accessible today because of asteroid bombardment.

So when a Start is exploded in Space, gold is formed on earth and hence it is considered as God’s money, whose intrinsic value will remain forever and again it is limited in quantity.

The guide to investing in gold and silver gives a lot of interesting background information on money and currency. I found this information very interesting to learn about, and would suggest to anyone interested in creating wealth to learn more about this topic. The main point is gold is real money, do not get confused with currency that the governments hand out. It is very important to know the difference.

After all the history and background information is out of the way, Micheal Maloney moves the focus onto insuring you are investing is the right type of gold. The main concepts are:
1.     Watching out for scams where you think you are investing in gold however never get to hold real metal you have bought.
2.     The importance of having a plan
3.     Best way to buy gold and silver is to buy the physical metal that you own and can hold in your hands.


Michael Maloney has broken the book up into four parts, in which he gives you a good idea about what to expect in the book. As you can see, most of the book is made up of historic information he has researched about the history of money, currency and gold.

Part 1: Yesterday
Chapter 1: The Battle of the Ages Chapter 2: The Wealth of Nations Chapter 3: Old Glory Chapter 4: Greed, War, and the Dollar’s Demise Chapter 5: From Deep in the Woods the Golden Bull Came Charging Chapter 6: Booms and Crashes
Part 2: Today Chapter 7: What’s the Value? Chapter 8:The Dark Cloud Chapter 9: The Perfect Economic Storm Chapter 10: Coming in from the Cold...To Cold! Chapter 11: The Silver Lining
Part 3: Tomorrow Chapter 12: The Pendulum Chapter 13: Golden Castles
Part 4: How to Invest in Precious Metals Chapter 14: Beware the Pitfalls Chapter 15: Who Are You, and What’s Your Plan? Chapter 16: Let’s Get Physical
Chapter 17: Everything Is Illuminated in the Light of the Past
A lot of people think currency is money. For instance, when someone gives you some cash, you presumably think of it as money. It is not.
Cash is simply a currency, a medium of exchange that you can use to purchase something that has value, what we would call an asset. Currency is derived from the word current. A current must keep moving or else it will die (think electricity). A currency does not store value in and of itself. Rather, it is a medium whereby you can transfer value from one asset to another.

It was secretly stolen from the dollars you hold. As each new dollar enters circulation it devalues all the other dollars in existence because there are now more dollars chasing the same amount of goods and services. This causes prices to rise. It is the insidious stealth tax known as inflation, robbing you of your wealth like a thief in the night.

This is a pattern that has been repeating and repeating since the first great currency crash in Athens in 407 B.C.

Once a government has introduced a paper currency, they then expand the currency supply through deficit spending, printing even more of the currency to cover that spending, and through credit creation based on fractional reserve banking. Then, usually due to war or some other national emergency, like foreign governments or the local population trying to redeem their demand notes (bank runs), the government will suspend redemption rights because they don’t have enough gold and silver to cover all of the paper they have printed, and poof!

The Author explains about the stupid mistakes people makes in terms of fiat money, people have learned the kind of damage fiat currency can cause and how gold and silver prices were revalued by giving many example and stories from history.

People started converting their notes to coin, and bought anything of transportable value. Jewellery, silverware, gemstones, and coin were bought and sent abroad or hoarded.

In order to stop the bleeding, in February of 1720 the banks discontinued note redemption for gold and silver, and it was declared illegal to use gold or silver coin in payment. Buying jewellery, precious stones, or silverware was also outlawed. Rewards were offered of 50 percent of any gold or silver confiscated from those found in possession of such goods (payable in banknotes of course).

The borders were closed and carriages searched. The prisons filled and heads rolled, literally.

As you can imagine, the frenzy to convert paper back to coin was so intense that near riot conditions ensued. Gold and silver had delivered a knockout blow.

So the book is all about the importance of investing in gold and silver and how over the years the currency value backed by gold is being manipulated by the goverment and the fiat currency has devalued and how it effected the middle class people by creating inflation and hence looting the common people and how can the common middle class people save themselfs from this loot by the goverment.