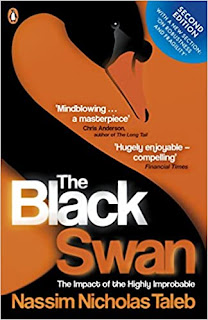 The Black Swan: The Impact of the Highly Improbable is a 2007 book by author and former options trader Nassim Nicholas Taleb. The book focuses on the extreme impact of rare and unpredictable outlier events—and the human tendency to find simplistic explanations for these events, retrospectively.

A Black Swan has three characteristics:

The Triplet of Opacity:

The Danger of Averages