The Wit and Wisdom of Charles by T. Munger

Looking for a great book click on the link https://amzn.to/3eIj4wU 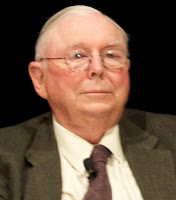 About the Author:
Charles Thomas Munger (born January 1, 1924) is an American investor, businessman, former real estate attorney, architectural designer, and philanthropist. He is vice chairman of Berkshire Hathaway, the conglomerate controlled by Warren Buffett; Buffett has described Munger as his partner.

This book has many interesting and great piece of advice of how to live happy, meaningful, memorable and successful life!


1. Reward and Punishment Super response Tendency — incentives:
The power that the incentives and disincentives have on shaping peoples mind and
The Author says, so many people do not understand the how important this
Incentives are in shaping people motivation to complete a task. It has a lot of
Importance in changing people behavior.
For example, lets say you have a digital marketing agency and your trying to get a
restaurant as a client to sign up, you can use the Reward / Punishment bias by
telling your prospect that they would see an increase of 50% in sales within a year
of strategic marketing but if they don’t act now then we’ll go to your competitor
across the block and offer the same offer to them , ultimately benefiting the
competitor vs the client your trying to close.
This reward / punishment bias makes the prospect instantly feel good, but then
KILLS them when you immediately provide the punishment if they fail to act
NOW!
This causes urgency and creates a WIN/WIN scenario considering your ethically
doing the right thing.

2. Liking/Loving Tendency:
We are more likely to ignore faults and comply with wishes of our friends or lovers
rather than random strangers. We favour people, products, and actions associated
with our favourite celebrities. Sometimes we even distort facts to facilitate love.
The influence that our friends, parents, lovers, and idols exert on us can be
enormous.

For Example, We are more likely to buy in a familiar, friendly setting and under the
obligation of friendship rather than from an unfamiliar store or a catalog. We simply
find it much harder to say “no” or disagree when it’s a friend. The possibility of
ruining the friendship, or seeing our image altered in the eyes of someone we like,
is a powerful motivator to comply.

3. Disliking/Hating Tendency:
In a pattern obverse to Liking/Loving Tendency, the newly arrived human is also
"born to dislike and hate" as triggered by normal and abnormal triggering forces in
its life. As a result, the long history of man contains almost continuous war...

Disliking/Hating Tendency also acts as a conditioning device that makes the
Dislike/hater tend to
Ignore virtues in the object of dislike object, people, products, and actions merely
associated with the object of his dislike, and
Distort other facts to facilitate hatred.

4. Doubt-Avoidance Tendency: The brain of man is programmed with a tendency to quickly remove doubt by reaching some decision. What triggers this tendency – Social Proof Tendency, Stress-Influence Tendency.

5. Inconsistency-Avoidance Tendency: The brain of man conserves programming space by being reluctant to change, which is a form of inconsistency avoidance. It is therefore highly possible that a quickly reached conclusion (brought about Doubt-Avoidance Tendency), when combined with a tendency to resist any change in that conclusion, will naturally cause a lot of errors in cognition for modern man. Experienced experts and analysts are susceptible to this error as they tend to dismiss or underweight evidence pointing to a contrary conclusion. Chars Darwin trained himself early to intensively consider any evidence tending to dis-confirm any hypothesis of his.  One collateral tip: if you want to gain approval from someone, ask them to perform some minor harmless favor.

6. Curiosity Tendency – “Curiosity – enhanced by the best of modern education – much helps man to prevent or reduce the worst consequences arising from other psychological tendencies. The curious are also provided with much fun and wisdom long after formal education has ended.”

7. Kantian Fairness Tendency – Human’s tend to follow those behavior tendencies that, if followed by all others, would make the surrounding human system work best for everybody.

9. Reciprocation Tendency – This is the automatic tendency of humans to reciprocate both favors and disfavors has long been noticed. Two corollary. First, the standard antidote to one’s overactive hostility is to train oneself to defer reaction. (“You can always tell a man off tomorrow, if it is such a good idea.”). Second, you should beware of selling technique that starts with one party doling out “small / free favors” to the other party. Example: car salesman offering free coffee/drink/advice/gift to the potential customer.

10. Influence-from-Mere-Association Tendency – This is a tendency by which a mere association with a man’s pre-existing conception will trigger pre-established response. Example: investors attributing high-priced stocks with quality stocks because “high price” is a pre-existing conception that leads to the response of accepting that as “high quality”. Another consequence is that man will over-confidently engage in certain endeavors because such endeavors possess seemingly similar traits to past successes. Example: thinking of Napoleon and Hitler when they invaded Russia. Antidote to be misled by past success: (1) Carefully examine each past success, looking for accidental, non-causative factors associated with each success (e.g. Buying stock on certain day of the week), (2) look for dangerous aspects of new undertaking that were not present in past successes. Lastly, do not associate “bad news” with “incompetence” in the person who delivers that message to you – else you risks living in a cocoon, for ever parting with reality.

11. Simple, Pain-Avoiding Psychological Denial – Simply put, this accounts for investors’ reluctance to cut losses in a money-losing investment. “The reality is too painful to bear, so one distorts the facts until they become bearable”.

12. Excessive Self-Regard Tendency – This is the tendency to overestimate our own ability or the characteristics of objects within our possession (the latter is called “the endowment effect”). The consequences of this tendency: (1) the tendency to “love” a stock just because one owns it; (2) The tendency to select as new member to an organization people who look similar or have similar background as one’s own (WASP hiring – anyone?); (3) over-weighting the predictive quality of face-to-face interaction – our ability to judge people on-spot; (4) the excessive needs to make excuses for one’s failures. The best antidote for this is to force yourself to be more objective when you are thinking about yourself, your family and friends. This isn’t easy by any measures.

13. Over-optimism Tendency – Human’s tendency to be over-optimistic, especially when they are happy mood. In combination with excessive self-regard tendency, this tendency might result in investors being reckless (overpaying or allocating too high an allocation) to an investment. The standard antidote is the trained, habitual use of high school probability math of Fermat and Pascal.

14. Deprival Super-Reaction Tendency – The quantity of  man’s pleasure from a ten dollar gain does not exactly match the quantity of his displeasure from a ten-dollar lost. “Moreover, if a man almost gets something he greatly wants and has it jerked away from him at the last moment, he will react much as if he had long owned the reward and had it jerked away”. Observable consequences: (1) politics infighting within organizations; (2) the maintenance of group-think, (3) union’s reluctance to take small pay-cut.

15. Social-Proof Tendency – The tendency of man to think and do what he observes to be thought and done around him. This is the root of the now-popular advice for people to associate with peers that inspire them and whom they aspire to be. This also accounts for: (1) group member’s reluctance to stand up against wrong behavior of others in the group; (2) manias in stock markets (e.g. Tech bubble and 2008 financial crisis). Social-Proof tendency is triggered most readily in the presence of puzzlement and/or stress. Best antidote: independent and critical thinking.

16. Contrast-Misreaction Tendency – This is man’s tendency to rely on comparison contrasts to make decision. Example of (mis)usage of this tendency by salesman: “to make an ordinary price seem low, the vendor will very frequently create a highly artificial price that is much higher than the price sought, then advertise this standard price as a big reduction from this phony price”. Consequence: “When a man’s steps are consecutively taken toward disaster, with each step being very small, the brain’s Contrast-Misreaction Tendency will often let the man to go too far toward disaster to be able to avoid it. This happen because each step presents small a contrast from his present position.”

17. Stress-Influence Tendency – Light stress can slightly improve performance (e.g. Exam-taking situation) but high stresses can cause dysfunction. In addition, high stress can cause large reversal in a being’s behavior (Pavlov’s experiments with dogs). Interestingly, this might just be the premise that the stress-inducing methods presented in Dead Pool and Wanted movies are based on.

18. Availability-Misweighting Tendency – This is man’s disposition to put unjustifiably high weighting on information and data that is easily available and/or extra vivid. Analysts are most susceptible to this tendency when they rely too much on data that is easily obtained or quantifiable (e.g. Putting too much weight toward industry growth figure, but not industry trend and customers’ preference). Antidote: (1) imposing procedures, checklists; (2) focus on disconfirming evidence; (3) to remember that “an idea or a fact is not worth more merely because it is easily available to you”.

19. Use-it-or-Lose-it Tendency: “Throughout his life, a wise man engages in practice of all his useful, rarely used skills, many of them outside his discipline, as a sort of duty to his better self. If he reduces the number of skills he practices and, therefore, the number of skills he retains, he learning capacity will shrink as he creates gaps in the lattice-work of theory he needs as a framework for understanding new experience”. “A wise man engaged in learning some import skill will not stop until he is really fluent in it.”

20. Drug-Misinfluence Tendency – Stay away from substances.

21. Senescence-Misinfluence Tendency – The effects of old age on cognition. “Continuous thinking and learning, done with joy, can somewhat help delay what is inevitable”.

22. Authority-Misinfluence Tendency – Man’s tendency to follow authority figures even when it is irrational and foolish to do so. “Man is often destined to suffer greatly when the leader is wrong or when his leader’s ideas don’t get through properly in the bustle of life and are misunderstood”. This tendency accounts for junior/co-pilots’ reluctance to disobey even irrational orders from their more senior counterparts.

23. Twaddle Tendency – The tendency to engage in trivial or foolish speech, even when one knows nothing on the subject. “And it’s a very important part of wise administration to keep prattling people, pouring out twaddle, far away from the serious work.”

24. Reason-Respecting Tendency – Man’s tendency to comply with a request if it is supported with reason and logic. Upside: “Learning is most easily assimilated and used when, life long, people consistently hang their experience, actual and vicarious, on a latticework of theory answering question: Why?”. Downside: meaningless or incorrect reason will also increase compliance.

25. Lollapallooza Tendency – “The tendency to get extreme consequences from Confluences of Psychological Tendencies acting in favor of a particular outcome”.
By Sangita Deori at July 13, 2020